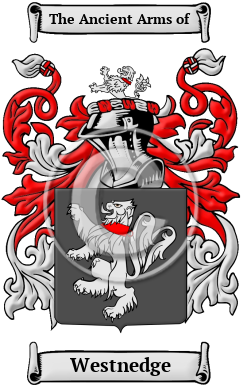 Early Origins of the Westnedge family

The surname Westnedge was first found in Leicestershire at Osgarthorp where Sir Philip de Wasteneys, inherited lands through marriage with Hardulph's great-granddaughter, Amphelis in the latter part of the twelfth century.

Early History of the Westnedge family

Outstanding amongst the family at this time was Sir Hardolph Wasteneys received a baronetcy from James I. in 1622, and was Sheriff of the county in 1636. One of his younger sons was an ardent Cavalier, "memorable," says Wotton, "for slaying five Persons at the Devizes, co. Wilts, on the behalf of the...
Another 53 words (4 lines of text) are included under the topic Early Westnedge Notables in all our PDF Extended History products and printed products wherever possible.

Westnedge migration to the United States +

Westnedge Settlers in United States in the 19th Century