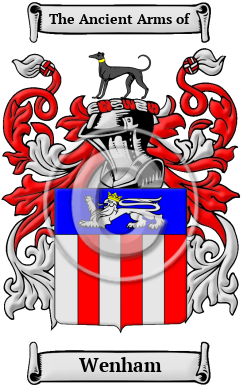 Early Origins of the Wenham family

The surname Wenham was first found in Suffolk at Great Wenham (Wenham-Combustor) or Little Wenham, villages and parishes that date back to the Domesday Book of 1086 where they were collectively listed as Wenham. [1] The place name possibly means "homestead or enclosure with pastureland" from the Old English "wynn" + "ham." [2] Little Wenham is home to Wenham Castle, a castellated manor house, one of the oldest houses in England built by John de Villabus in the 13th century. One of the first records of the surname was found in Surrey in the year 1194 when William and Hawise Wenham held estates in that county. [3]

Early History of the Wenham family

This web page shows only a small excerpt of our Wenham research. Another 101 words (7 lines of text) covering the years 1327, 1525, 1455, 1487, 1730 and 1712 are included under the topic Early Wenham History in all our PDF Extended History products and printed products wherever possible.

Distinguished members of the family include Jane Wenham (died 1730), generally regarded as one of the last witches in England. Her trial took place in 1712 and was reported widely in printed tracts of the period. She was convicted, but the judge...
Another 42 words (3 lines of text) are included under the topic Early Wenham Notables in all our PDF Extended History products and printed products wherever possible.

Wenham migration to the United States +

Wenham Settlers in United States in the 17th Century

Wenham Settlers in Australia in the 19th Century

Wenham Settlers in New Zealand in the 19th Century