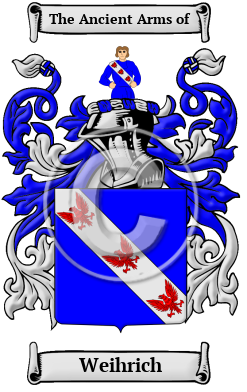 The surname Weihrich is of German origin, and is derived from a nickname meaning "priest spreading incense." Etymologists believe that the name Weihrich may also be derived from the personal names Wirich, Wigerich, and Wigirich, indicating descent.

Early Origins of the Weihrich family

Early History of the Weihrich family

Another 34 words (2 lines of text) are included under the topic Early Weihrich Notables in all our PDF Extended History products and printed products wherever possible.

Weihrich migration to the United States +

Weihrich Settlers in United States in the 19th Century

Weihrich Settlers in United States in the 20th Century