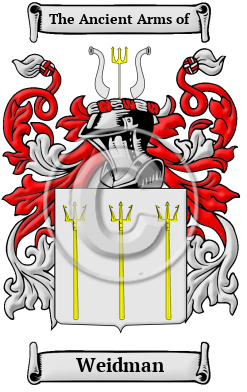 There are several possible origins for the name Weidman because the German word "weide" from which it originates has three quite different definitions. Firstly, it means "willow," implying that the first bearer could have been someone who lived near a large or notable willow tree; many surnames in Germany and most other European countries were taken from some noteworthy feature near the person's house. Secondly, it means "grazing," implying that the name may have been taken because the first bearer lived near good grazing lands. Lastly, the word also means "hunting"; this could mean that the man was a hunter, or it could mean that he lived near well-known hunting grounds.

Early Origins of the Weidman family

The surname Weidman was first found in Westphalia, where the name Weidman emerged in mediaeval times as one of the notable families of the region. From the 13th century the surname was identified with the great social and economic evolution which made this territory a landmark contributor to the development of the nation.

Early History of the Weidman family

This web page shows only a small excerpt of our Weidman research. Another 80 words (6 lines of text) covering the years 1686 and 1743 are included under the topic Early Weidman History in all our PDF Extended History products and printed products wherever possible.

More information is included under the topic Early Weidman Notables in all our PDF Extended History products and printed products wherever possible.

In the United States, the name Weidman is the 8,231st most popular surname with an estimated 2,487 people with that name. [1]

Weidman migration to the United States +

Weidman Settlers in United States in the 18th Century

Weidman Settlers in United States in the 19th Century