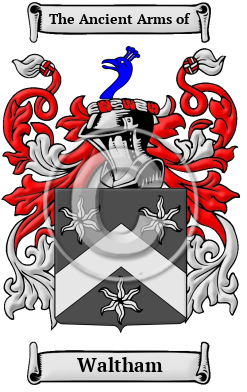 Early Origins of the Waltham family

The surname Waltham was first found in Leicestershire. "The name Waltham is compounded of the Saxon words Weald and Ham, signifying a residence in or near a wood. The town derived its origin, in the time of Canute the Great, from the facility and inducement for hunting afforded by the neighbourhood, which led Ralph de Toni, standard-bearer to that monarch, to build a few houses. Within the choir [of the local abbey], or eastern chapel, was entombed the body of Harold, who was slain in the battle of Hastings; with the bodies of his brothers Gurth and Leofwin. " [1]

The Saxon influence of English history diminished after the Battle of Hastings in 1066, but Saxon surnames survived and the family name was first formally referenced in the year 1119 when John de Waltham held estates in Colchester in Essex. [2]

John de Waltham (d. 1395) was Bishop of Salisbury and Treasurer of England, born at Waltham, near Grimsby, Lincolnshire. "He was the son of John and Margaret Waltham, whose tomb still exists in the church of Waltham, bearing an inscription quoted in the 'Archæological Journal' " [3]

Early History of the Waltham family

Spelling variations of this family name include: Waltham, Whaltham, Watham, Whatham, Wotham and many more.

Another 44 words (3 lines of text) are included under the topic Early Waltham Notables in all our PDF Extended History products and printed products wherever possible.

Waltham migration to the United States +

Waltham Settlers in United States in the 19th Century

Waltham Settlers in United States in the 20th Century

Waltham Settlers in Australia in the 19th Century