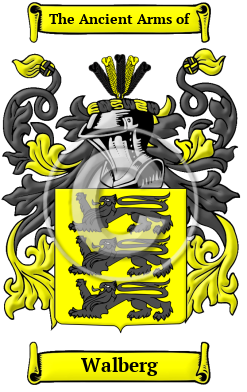 Early Origins of the Walberg family

The surname Walberg was first found in Baden, where the name was anciently associated with the tribal conflicts of the area.

Walburge or Walpurga (d. 779?), was an ancient saint, abbess of Heidenheim, the sister of Willibald and Wynnebald. Their legend calls them the children of a certain Richard, but the name is an impossible one. Boniface (680-755) wrote from Germany, asking that the two nuns Lioba and Walburga might be sent to him. "It is therefore supposed that Walburga was with Lioba at Wimborne, and that she went with her to Germany in 752. Legend, no doubt wrongly, makes Walburga accompany her brothers to Italy in 721. She was present at the death of her brother Wynnebald in 761 at Heidenheim. She was living in or after 778, when an anonymous nun wrote lives of her brothers. " [1]

Early History of the Walberg family

This web page shows only a small excerpt of our Walberg research. Another 89 words (6 lines of text) covering the years 1686 and 1803 are included under the topic Early Walberg History in all our PDF Extended History products and printed products wherever possible.

Spelling variations of this family name include: Waldburg, Walburg and others.

More information is included under the topic Early Walberg Notables in all our PDF Extended History products and printed products wherever possible.

Walberg migration to the United States +

Walberg Settlers in United States in the 19th Century