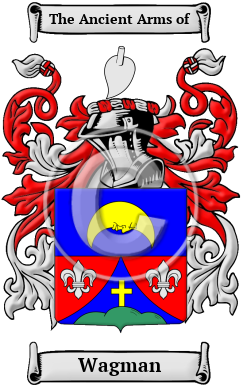 The surname Wagman is derived from several possible origins. In most cases, the name comes from the Germanic personal name Wigman, which is in turn derived from the Old High German word "wigan" meaning "to fight," or from "wih" meaning "holy." The surname Wagman may also be occupational in origin, from the trade or profession of the original bearer. In this instance, the name would derive from the Swabian term "Wegman," Swabian for "herb," and the original bearer would have worked in some way with herbs. In other cases Wagman, was likely derived from the word "Wege," meaning "a road" or "path, " suggesting that tha surname was firs born by someone who lived near a road or path.

Early Origins of the Wagman family

The surname Wagman was first found in Germany, where the name Wagman came from humble beginnings but gained a significant reputation for its contribution to the emerging mediaeval society. It later became more prominent as numerous branches of the same house acquired distant estates, some of which were located in other countries.

Early History of the Wagman family

Spelling variations of this family name include: Wegman, Wegmann, Wägmann, Wagmann,Wegemann and many more.

Another 36 words (3 lines of text) are included under the topic Early Wagman Notables in all our PDF Extended History products and printed products wherever possible.

Wagman migration to the United States +

Wagman Settlers in United States in the 18th Century