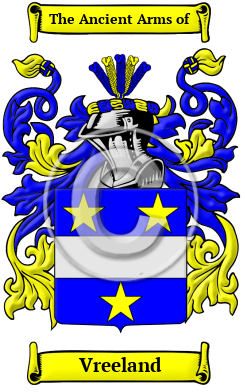 The distinguished surname Vreeland is Dutch in origin. It is most likely derived from the place name "Vreeland," which is itself derived from the Middle Dutch word "vrede," meaning "legal protection against armed violence." Thus, the town of Vreeland was probably located in an area protected by official restrictions on combat.

Early Origins of the Vreeland family

The surname Vreeland was first found in Holland, where the city of Vreeland is located, approximately halfway between Amsterdam and Utrecht. It is likely that the initial bearer of the name was a resident of the town of Vreeland.

Early History of the Vreeland family

This web page shows only a small excerpt of our Vreeland research. Another 100 words (7 lines of text) are included under the topic Early Vreeland History in all our PDF Extended History products and printed products wherever possible.

Spelling variations of this family name include: Vreeland, Van Vreeland, Freeland and others.

More information is included under the topic Early Vreeland Notables in all our PDF Extended History products and printed products wherever possible.

In the United States, the name Vreeland is the 11,286th most popular surname with an estimated 2,487 people with that name. [1]

Vreeland migration to the United States +

Vreeland Settlers in United States in the 17th Century

Vreeland Settlers in United States in the 18th Century

Vreeland Settlers in United States in the 19th Century