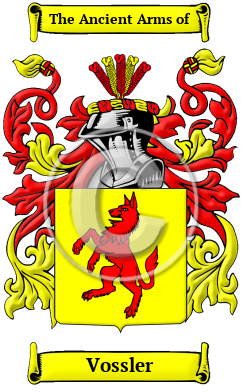 The Vossler family name emerged in Pomerania, a territory of Germany and a maritime province of Prussia. Pomerania was bounded on the south by Brandenburg, on the west by Mecklenburg, and on the east by Poland. During the 5th century, Pomerania was settled by Pommern, who were a Slavic tribe. Pommern, meaning on the sea, became the name of this region during the reign of the Charlemagne.

Early Origins of the Vossler family

The surname Vossler was first found in Mecklenburg and Pomerania, where this old family name was associated with the feudal society which would become prominent throughout European history. The name would later emerge as a noble family with great influence, having many distinguished branches, and become noted for its involvement in social, economic and political affairs. Chronicles first mention the knight Johann Vossing of Stravenhaven in Mecklenburg around 1260, and the knight Johann Voss was an advisor to Prince Nicolaus von Werle. Hamburg chronicles first mention Heyno Vosseke in 1300.

Early History of the Vossler family

Prominent bearers of the name Vossler at this time were Simon de Vos (1603-1676), a Flemish Baroque painter of genre and cabinet pictures; Vinzenz Fux (c.1606-1659), German organist and composer at the church Maria am Gestade in Vienna; Judocus...
Another 38 words (3 lines of text) are included under the topic Early Vossler Notables in all our PDF Extended History products and printed products wherever possible.

Vossler migration to the United States +

Vossler Settlers in United States in the 18th Century

Vossler Settlers in United States in the 19th Century

Vossler Settlers in United States in the 20th Century