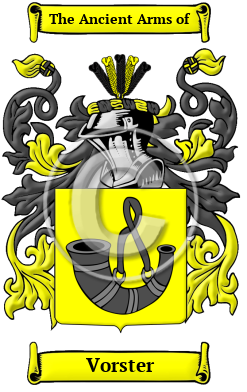 Early Origins of the Vorster family

The surname Vorster was first found in Holland, where the name became noted for its many branches in the region, each house acquiring a status and influence which was envied by the princes of the region. The name was first recorded in South Holland, a province of Holland, the most crowded province of the Netherlands. The principal cities are Rotterdam, Leyden and Shiedam. Noted is the famed castle of Teilengen where Jacqueline of Bavaria is buried. In their later history the surname became a power unto themselves and were elevated to the ranks of nobility as they grew into this most influential family.

Early History of the Vorster family

From this era of Dutch history, those of this who distinguished themselves included Willem Vorsterman (died 1543), an early printer of books, active in Antwerp between 1504 and 1543. He published about 400 books in Dutch, Spanish, English, Latin, French and Danish, making him the second most productive printer in the Netherlands in the first half of the 16th century. Lucas Vorsterman the Elder (1595-1675), was a Baroque engraver who worked with the artists Peter Paul Rubens and Anthony van Dyck, as well as for patrons...
Another 84 words (6 lines of text) are included under the topic Early Vorster Notables in all our PDF Extended History products and printed products wherever possible.

In South Africa, the name Vorster is the 260th most popular surname with an estimated 26,109 people with that name. [1]

Vorster migration to the United States +

Vorster Settlers in United States in the 18th Century

Vorster Settlers in United States in the 19th Century