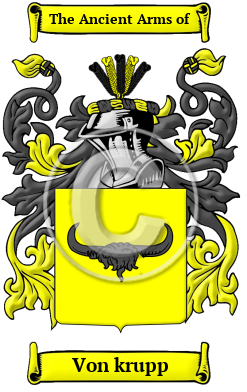 The surname Von krupp was first found in Hamburg, where the family gained a significant reputation for its contributions to the emerging mediaeval society. Individual bearers of the name first mentioned in ancient chronicles include Heyno Crup (Crupe) of Hamburg (c.1265). Hamburg, first mentioned in 800 A.D., was no larger than a village in Pre-Christian times, but soon expanded to be Germany's oldest and largest seaport, "das Tor zur Welt," the gateway to the world. It received its charter in 1189 from Emperor Frederick Barbarossa, making its harbor over 800 years old. Hamburg became a member of the Hanseatic league in the 13th century, Europe's most powerful trading organization, and members of the family flocked to this commercial center to capitalize on their interests during its expansion.

This web page shows only a small excerpt of our Von krupp research. Another 45 words (3 lines of text) covering the years 1812, 1848, 1854, 1886, and 1887 are included under the topic Early Von krupp History in all our PDF Extended History products and printed products wherever possible.

Notables of the time included Alfred Krupp (1812-1887), a German metallurgist, who developed a process for making cast steel. The metal foundry in Essen which he had taken over from his father in 1848 was in turn taken over by his...
Another 41 words (3 lines of text) are included under the topic Early Von krupp Notables in all our PDF Extended History products and printed products wherever possible.

Migration of the Von krupp family

Some of the first settlers of this family name or some of its variants were: Benjamin Krupp migrated to Canada in 1830; Georg Krupp arrived in New York in 1849; Johann Heinrich August Kruppe settled in America in 1854; Johann Kruper-Hohle settled in Texas in 1854 with his wife Rosina and son Johann.