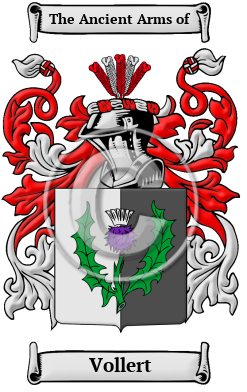 The ancient and distinguished German surname Vollert is derived from the Germanic personal name "Volkher," which is composed of the elements "volk," meaning "people," and "her," meaning "army." The name was popular during the early Middle Ages due to the famous Austrian epic poem "Nibelungenlied," which featured a character called "Volker the Fiddler." Both the surname and the given name could be found in many areas of Germany under a number of spelling variations.

Early Origins of the Vollert family

The surname Vollert was first found in the south, near the border of Austria, where the fame of the "Niebelungenlied" first reached Germany. The first recorded bearer of the surname was Conrad filius ("son of") Volkardi, who was living near Tuttlingen, Swabia in 1280. The young Vollert family played a major role in the early history of the region, and contributed greatly to the development of medieval German society.

Early History of the Vollert family

More information is included under the topic Early Vollert Notables in all our PDF Extended History products and printed products wherever possible.

Vollert migration to the United States +

Vollert Settlers in United States in the 18th Century

Vollert Settlers in United States in the 19th Century