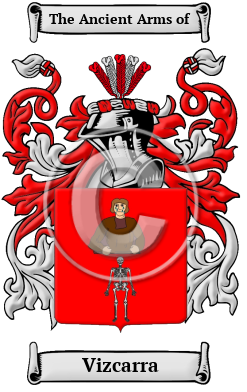 The surname Vizcarra is derived from the name of the province of Vizcaya.

Early Origins of the Vizcarra family

The surname Vizcarra was first found in the Basque province of Vizcaya in the town of Guernica, Spain.

Early History of the Vizcarra family

This web page shows only a small excerpt of our Vizcarra research. Another 41 words (3 lines of text) covering the years 1503 and 1772 are included under the topic Early Vizcarra History in all our PDF Extended History products and printed products wherever possible.

Spelling variations of this family name include: Vizcarra, Viscarra, Vizcarri and others.

Another 43 words (3 lines of text) are included under the topic Early Vizcarra Notables in all our PDF Extended History products and printed products wherever possible.

In the United States, the name Vizcarra is the 14,155th most popular surname with an estimated 2,487 people with that name. [1]

Migration of the Vizcarra family

Some of the first settlers of this family name or some of its variants were: A. Lago Viscarri, who arrived in New Orleans in 1829; and the de Vizcarra family, who had settled in Mexico much earlier.