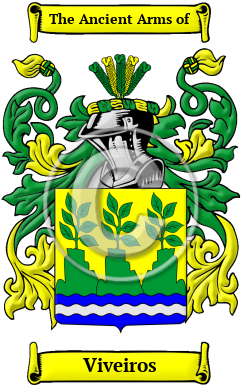 The Portuguese surname Viveiros is of local origin, derived from a place name where the original bearer resided or held land. In this instance, the surname derives from Viveros, a town located in the province of Albacete, Spain. The origin of the place name derives from the Castilian term "vivero," meaning "nursery" or "fish farm," from the Latin "vivaria," thus perhaps indicating that the town was established near such a feature.

Early Origins of the Viveiros family

The surname Viveiros was first found in near the Village of Albacete in Spain. However, once the region of Portugal became an independent kingdom, the Viveiros surname became an important Portuguese family name.

Early History of the Viveiros family

This web page shows only a small excerpt of our Viveiros research. Another 99 words (7 lines of text) covering the year 1840 is included under the topic Early Viveiros History in all our PDF Extended History products and printed products wherever possible.

Spelling variations of this family name include: Viveros, Viveiro, Vivero and others.

More information is included under the topic Early Viveiros Notables in all our PDF Extended History products and printed products wherever possible.

In the United States, the name Viveiros is the 13,887th most popular surname with an estimated 2,487 people with that name. [1]

Viveiros migration to the United States +

Viveiros Settlers in United States in the 19th Century

Viveiros Settlers in United States in the 20th Century