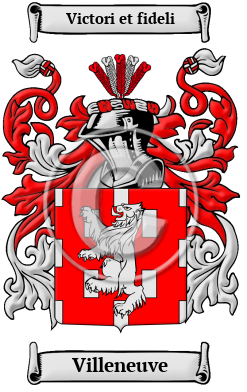 The prestigious surname Villeneuve comes from the region of Provence, in France. The surname Villeneuve is of local origin, and is therefore a type of hereditary surname. Local surnames are derived either from an already existing place-name or from a local feature of the geography. In this case, it is derived from the Old French elements "ville," which meant farm, and "neuve," which meant "new." Therefore the surname translates to "dweller on the new farm."

Early Origins of the Villeneuve family

The surname Villeneuve was first found in Provence, where this noble family has been discovered since ancient times.

Pierre Sylvestre de Villeneuve, a sailor, vice-admiral of France, participated in various battles, including the American War (1793). Huon de Villeneuve was a poet during the late twelfth century and early thirteenth century. Gabrielle-Suzanne Villeneuve (1695-1755) was a novelist. Theodore-Ferdinand de Villeneuve (1799-1858) was a dramatic author.

André Villeneuve, born in 1698, son of Pierre and Marie-Madeleine (née Golin), travelled from France to the New World in the 18th century. After arriving in Canada he married Marie-Madeleine Lemarie, daughter of Charles and Marie-Françoise (née Sedillot), on 16th November 1722. They settled at Sainte-Foy, Quebec and remained there together until Marie-Madeleine's death on 24th May 1766. André passed away on 2nd July 1774. [1]

Early History of the Villeneuve family

This web page shows only a small excerpt of our Villeneuve research. Another 65 words (5 lines of text) covering the years 1763, 1806, 1805, 1756 and 1794 are included under the topic Early Villeneuve History in all our PDF Extended History products and printed products wherever possible.

Another 34 words (2 lines of text) are included under the topic Early Villeneuve Notables in all our PDF Extended History products and printed products wherever possible.

Villeneuve migration to the United States +

Villeneuve Settlers in United States in the 18th Century

Villeneuve Settlers in United States in the 19th Century

Villeneuve Settlers in United States in the 20th Century

Villeneuve Settlers in Canada in the 17th Century

Villeneuve Settlers in Canada in the 18th Century

Villeneuve Settlers in Canada in the 20th Century