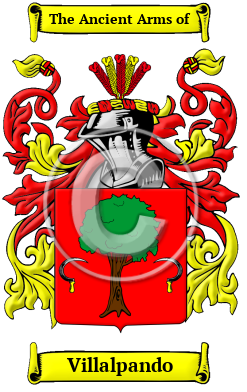 Although the exact origin of the Spanish surname Villalpando is unclear, research suggests that, like most Spanish compound surnames containing the first element "Villa," the surname was adopted as a surname from the name of a place of residence. The Latin "Villa" means town. It is the place name that is uncertain.

Early Origins of the Villalpando family

The surname Villalpando was first found in Andalusia, in southern Spain, the chief city being Seville an ancient pre-Roman Iberian town.

Early History of the Villalpando family

This web page shows only a small excerpt of our Villalpando research. Another 89 words (6 lines of text) covering the years 1552, 1608, 1616 and 1694 are included under the topic Early Villalpando History in all our PDF Extended History products and printed products wherever possible.

Another 42 words (3 lines of text) are included under the topic Early Villalpando Notables in all our PDF Extended History products and printed products wherever possible.

In the United States, the name Villalpando is the 7,236th most popular surname with an estimated 4,974 people with that name. [1]

Villalpando migration to the United States +

Villalpando Settlers in United States in the 19th Century

Villalpando Settlers in United States in the 20th Century