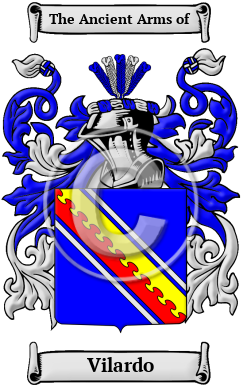 The Vilardo family can trace its noble origins to the Italian region of Piedmont. Although people were originally known only by a single name, it became necessary for people to adapt a second name to identify themselves as populations grew and travel became more frequent. The process of adopting fixed hereditary surnames was not complete until the modern era, but the use of hereditary family names in Italy began in the 10th and 11th centuries. Italian hereditary surnames were developed according to fairly general principles and they are characterized by a profusion of derivatives coined from given names. Although the most traditional type of family name found in the region of Piedmont is the patronymic surname, which is derived from the father's given name, local surnames are also found. Local names, which are the least frequent of the major types of surnames found in Italy, are derived from a place-name where the original bearer once resided or held land. Often Italian local surnames bore the prefix "di," which signifies emigration from one place to another, but does not necessarily denote nobility. The Vilardo family lived in the region of Piedmont.

Early Origins of the Vilardo family

The surname Vilardo was first found in the valleys of Maira, which lie south of Turin. The Berardi family can be traced back to this area, where they resided in the 12th century. Saint Berardo (died 1123) is an Italian saint, patron saint of the city and diocese of Teramo.

Early History of the Vilardo family

This web page shows only a small excerpt of our Vilardo research. More information is included under the topic Early Vilardo History in all our PDF Extended History products and printed products wherever possible.

Italian surnames come in far more variations than the names of most other nationalities. Regional traditions and dialects are a decisive factor in this characteristic. For example, northern names tend to end in "o", while southern in "i". Also important, but not unique to Italy, was the fact that before dictionaries and the printing press most scribes simply spelled words according to their sounds. The predictable result was an enormous number of spelling variations. The recorded spellings of Vilardo include Berardi, Berardo, Berardis, Beraldi, Beraldo, Beraudo, Verardi, Verardo, Veraldi, Veraldo, Veralli, Verallo, Velardi, Velardo, Vilardi, Vilardo, Berardelli, Berardini, Berardino, Berardinelli, Berardinetti, Berardocchi, Berarducci, Beraldini, Beraldin, Belardelli, Belardetti, Belardini, Belardinelli, Belardoni, Bellardino and many more.

Prominent among members of the family was Giovanni Berardi, an ecclesiastic in Tagliacozzo in the 13th century; Aldevrandino Beraldi was councillor of Treviso in the 14th century; Tommaso Beraldi was a judge and ambassador in Venice in 1320; Bartolomeo Beraldo was mayor of Castelfranco in 1387. Baldassarre Berardi was a castle owner in Dronero and was mayor of Alba in 1442; Costanzo Beraldi was senator of Rome in 1445 and mayor of Dronero and of the valleys around Maira; Alessandro Beraldi was a military captain in 1495 in Venice and died valiantly in the battle of Tauro; the Berardi family in Florence...
Another 123 words (9 lines of text) are included under the topic Early Vilardo Notables in all our PDF Extended History products and printed products wherever possible.

Vilardo migration to the United States +

Some of the first North American settlers with Vilardo name or one of its variants:

Vilardo Settlers in United States in the 19th Century

Vilardo Settlers in United States in the 20th Century