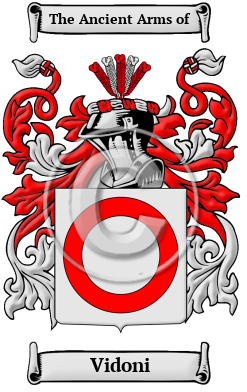 The name comes from the Latin word "vita," meaning "life."

Early Origins of the Vidoni family

The surname Vidoni was first found in Treviso, anciently known as Tarvisium, a town in Venetia, capital of the province of Treviso. The cathedral of San Pietro is notable and dates back to 1141. It is in the classical style with seven domes, and houses works by many notable painters and sculptors. In those ancient times only persons of rank, the podesta, clergy, city officials, army officers, artists, landowners were entered into the records. To be recorded at this time, at the beginning of recorded history, was of itself a great distinction and indicative of noble ancestry.

Early History of the Vidoni family

Prominent among members of the family was Cornelio Vitelli (fl. 1489), Italian scholar, born of a noble family at Corneto in the Romagna. [1] Vitellozzo Vitelli (c.1458-1502) was an Italian condottiero, Lord of Montone, Città di Castello, Monterchi and Anghiari; Timoteo Viti (1469-1523), was an Italian Renaissance painter closely associated with Raphael from...
Another 51 words (4 lines of text) are included under the topic Early Vidoni Notables in all our PDF Extended History products and printed products wherever possible.

Migration of the Vidoni family

Some of the first settlers of this family name or some of its variants were: A. M. and F. A. Viti, who both arrived in San Francisco in 1855; Raffaela DiVito, who traveled from Aquilonia, Italy to Montclain, New York in 1913; crossing the ocean on the SS Italia and Michele-Angelo DeVito, who arrived in New York on board the SS Anglia in 1891..