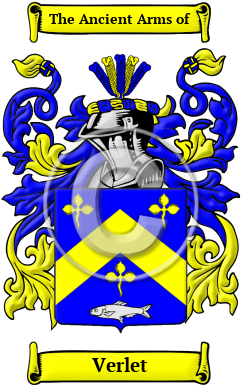 Early Origins of the Verlet family

The surname Verlet was first found in the Isle of France.

Early History of the Verlet family

This web page shows only a small excerpt of our Verlet research. Another 60 words (4 lines of text) covering the years 1575, 1595, 1722, and 1756 are included under the topic Early Verlet History in all our PDF Extended History products and printed products wherever possible.

Notable amongst the family was John Véron (d. 1563), French Protestant controversialist, born at or near Sens. "He studied at Orleans in 1534, and about 1536 settled in England, for his letters of denisation, 2 July 1544, state that he had been eight years in that country, that he had been a student at Cambridge." [2] François Véron (c.1575-1649), was a French...
Another 61 words (4 lines of text) are included under the topic Early Verlet Notables in all our PDF Extended History products and printed products wherever possible.

Verlet migration to the United States +

Verlet Settlers in United States in the 17th Century