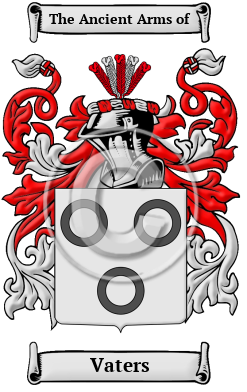 The ancient and distinguished German surname Vaters is derived from the High German "vater," meaning "father." It is likely that the name was originally bestowed as a nickname on someone who acted as a counselor or elder within an extended family or community. Alternatively, the name "Vader" was often used to refer to a clergyman or to a male attendant in a hospital; thus, the progenitor of the name may have been one who held such an occupation.

Early Origins of the Vaters family

The surname Vaters was first found in Bavaria, where the name Vatersheim was anciently associated with the tribal conflicts of the area. They declared allegiances to many nobles and princes of early history, lending their influence in struggles for power and status within the region. They branched into many houses, and their contributions were sought by many leaders in their search for power.

Early History of the Vaters family

Another 45 words (3 lines of text) are included under the topic Early Vaters Notables in all our PDF Extended History products and printed products wherever possible.

In Newfoundland, Canada, the name Vaters is the 400th most popular surname with an estimated 117 people with that name. [1]

Migration of the Vaters family

Some of the first settlers of this family name or some of its variants were: Paulus Vater, who immigrated to Philadelphia in 1742; Christian Vater, a mercenary from Anhalt-Zerbst who settled in Québec after fighting in the American Revolution, Andrew Fader, who was naturalized in Philadelphia in 1843.