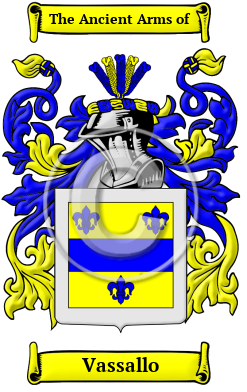 The distinguished surname Vassallo has roots in Spain, and is classified as being of occupational origin. It can be said that the most ancient and most interesting of surnames are those derived from the occupation of the original bearer. "Vasallo" has its roots in the Celtic word "vassallos" that came into the Italian and Castilian languages by way of the Latin "vassallus," meaning "vassal." The word Vasallo, and therefore the family surname Vassallo, is defined as "he who receives benefits or honor of a Lord, such as lands, money, or the condition of Knighthood, in exchange for important services that had been given to him."

Early Origins of the Vassallo family

Early History of the Vassallo family

This web page shows only a small excerpt of our Vassallo research. Another 65 words (5 lines of text) covering the years 1827 and 1885 are included under the topic Early Vassallo History in all our PDF Extended History products and printed products wherever possible.

Vassallo migration to the United States +

Vassallo Settlers in United States in the 20th Century