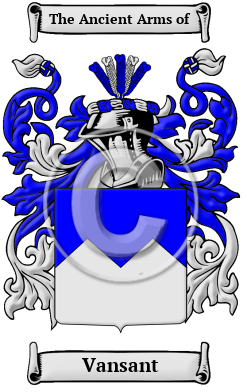 The name Vansant comes from the Rhineland, an ancient region of Germany. In pre-medieval times, the Germans used only one name, but later they were forced by a growing population to adopt hereditary surnames, so as to remain distinct from others using the same personal (first) name. Local names derived from place names, were often chosen. They originally indicated land ownership, and frequently carried the prefix von, meaning "of" or "from", which is often taken as an indication of aristocratic lineage. Vansant was a name for some one lived beside a rocky cliff. Vansant is a topographic surname, which was given to a person who resided near a physical feature such as a hill, stream, church, or type of tree. Habitation names form the other broad category of surnames that were derived from place-names. They were derived from pre-existing names for towns, villages, parishes, or farmsteads. Other local names are derived from the names of houses, manors, estates, regions, and entire counties

Early Origins of the Vansant family

The surname Vansant was first found in the Palatinate region of the Rhineland, where this family name became a prominent contributor to the development of the region, eventually moving north with the Palatinate counts to Duesseldorf in the duchy of Berg. Always prominent in social affairs, the name became an integral part of that turbulent region as it emerged to form alliances with other families within the Feudal System and the nation.

Early History of the Vansant family

Many cultural groups lived in the German states in medieval times. Each had its own dialect and traditions, and unique variations of popular names. Low German, which is similar to contemporary Dutch, was spoken in Westphalia. German names are characterized by additions such as regional suffixes and phrases that tell something about the origin or background of its original bearer. Further contributing to the variation in German names was the fact that there were no spelling rules in medieval times: scribes recorded names according to their sound. The recorded spelling variations of Vansant include Zandt, Zand, Zant and others.

Another 43 words (3 lines of text) are included under the topic Early Vansant Notables in all our PDF Extended History products and printed products wherever possible.

In the United States, the name Vansant is the 12,119th most popular surname with an estimated 2,487 people with that name. [1]

Vansant migration to the United States +

Between the 17th and 20th centuries, hundreds of thousands of Europeans came to North America, and many Rhinelanders were among them. They had many various reasons for making the choice: to escape poverty and persecution, for adventure, and for the opportunity to own their own land. Ellis Island, one of the main American immigration centers, saw many settlers as they moved on to the states of Pennsylvania, Ohio, Texas, Illinois, California, and New York. In Canada, they found homes in Ontario, and on the great plains of the Midwestern provinces. The Vansant were among of the early German families that came to North America:

Vansant Settlers in United States in the 17th Century

Vansant Settlers in United States in the 18th Century