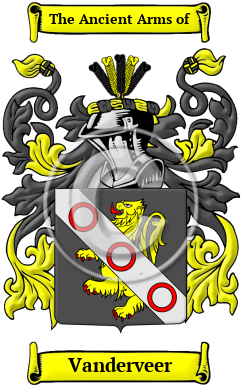 The Vanderveer surname is derived from the Dutch word "Veen," which means "fen" or "Peatbog," which is the most common geographical feature of the northern provinces of the Netherlands. Many instances of the surname are thought to be habitational, deriving from any of various places named with this word. The preposition "van" meaning "of" or "from" ' is commonly found with Dutch names, especially with habitation names. The preposition "de," meaning "the," is also commonly used with these names.

Early Origins of the Vanderveer family

The surname Vanderveer was first found in the Netherlands.

Early History of the Vanderveer family

This web page shows only a small excerpt of our Vanderveer research. Another 47 words (3 lines of text) covering the years 1639 and 1704 are included under the topic Early Vanderveer History in all our PDF Extended History products and printed products wherever possible.

Another 38 words (3 lines of text) are included under the topic Early Vanderveer Notables in all our PDF Extended History products and printed products wherever possible.

In Netherlands, the name Vanderveer is the 238th most popular surname with an estimated 5,509 people with that name. [1]

Vanderveer migration to the United States +

Vanderveer Settlers in United States in the 17th Century

Vanderveer Settlers in United States in the 19th Century