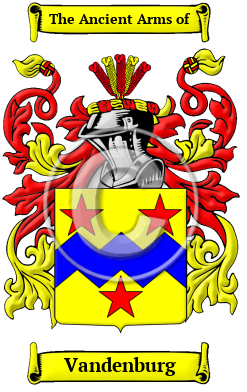 The surname Vandenburg comes from the Middle Dutch word "burch," or "burg," meaning a fortified town. The prefixes "Van" and "den" mean "from" and "the" respectively. Thus this surname means "from the hill". As such, it may have been topographic name for someone who lived by a citadel or walled city; or, it may have been a habitational name, taken on from a place name, such as Burch in South Holland or Burcht in Antwerp province, Belgium.

Early Origins of the Vandenburg family

The surname Vandenburg was first found in Holland, in Utrecht, a city and capital of the province of Utrecht. One old family-branch descends from the counts of Bergh, beginning with Constantius de Monte in the 12th century. There was a separate line of counts Van den Berghs in the 16th century.

Early History of the Vandenburg family

This web page shows only a small excerpt of our Vandenburg research. Another 58 words (4 lines of text) covering the years 1640, 1636, 1640, 1664, 1755, 1627 and 1664 are included under the topic Early Vandenburg History in all our PDF Extended History products and printed products wherever possible.

From this era of Dutch history, those of this who distinguished themselves included Johan van der Burg (d. 1640), Dutch Governor of Formosa from 1636 to 1640; Johan...
Another 28 words (2 lines of text) are included under the topic Early Vandenburg Notables in all our PDF Extended History products and printed products wherever possible.

Vandenburg migration to the United States +

Vandenburg Settlers in United States in the 19th Century