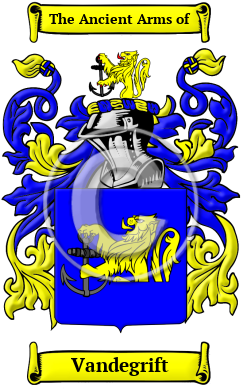 The distinguished surname Vandegrift was first found in Switzerland.

Early Origins of the Vandegrift family

The surname Vandegrift was first found in Switzerland, where the family contributed to the development of the region. They became prominent in local affairs and branched into many houses which played important roles in savage tribal and national conflicts, each group seeking power and status in an ever changing territorial profile.

Early History of the Vandegrift family

Notables of the time with the surname Vandegrift were Urs Graf (1485-1527), Swiss engraver and goldsmith, influenced by Albrecht Duerer; Cornelis de Graeff (1599-1664), Mayor of Amsterdam; Free Imperial Knight Andries de Graeff (1611-1678), Mayor of Amsterdam; Cornelis de Graeff (1671-1719), Dutch Canon of St. Pieter at...
Another 46 words (3 lines of text) are included under the topic Early Vandegrift Notables in all our PDF Extended History products and printed products wherever possible.

In the United States, the name Vandegrift is the 16,694th most popular surname with an estimated 2,487 people with that name. [1]

Migration of the Vandegrift family

Some of the first settlers of this family name or some of its variants were: Philip Leonhardt Graf, who, with his wife and five children, came to America in 1709. He was bearers of the name Graf to emigrate to the New World. Georg Graf arrived in Pennsylvania between 1743-1746.