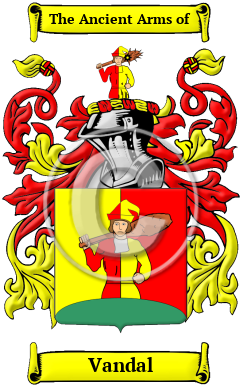 The roots of the distinguished German surname Vandal lie in the former duchy of Swabia. The name is derived from the personal names "Wand," "Wend," and "Wendel," which are themselves all derived from the Old High German verb "wandern," meaning "to wander." The original bearer of the surname was most likely the son of one named Wendel.

Early Origins of the Vandal family

The surname Vandal was first found in the duchy of Swabia, where it most likely first emerged. The earliest recorded bearer of the name was Hans Wenderl, who was a resident of the town of Weilheim in 1466. The young Vandal family was instrumental in the development of medieval Swabian society, and quickly became one of the prominent families of the region.

Early History of the Vandal family

Another 34 words (2 lines of text) are included under the topic Early Vandal Notables in all our PDF Extended History products and printed products wherever possible.

In Quebec, Canada, the name Vandal is the 928th most popular surname. [1]

Vandal migration to the United States +

Vandal Settlers in United States in the 19th Century