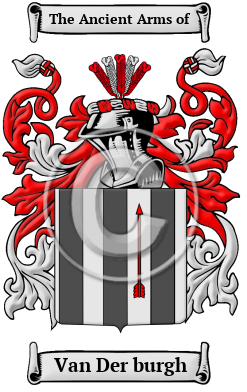 The surname Van Der burgh comes from the Old High German word "berg," which means "mountain." The first bearers of the name no doubt came from a mountain or high ground. The name is often found with the preposition "Van den," which mean "from the." In a low-lying, flat country like the Netherlands any area of higher ground was quite prestigious and as such, this was a popular and prestigious surname.

The surname Van Der burgh was first found in Holland, where it is thought to have existed since the 15th century.

From this era of Dutch history, those of this who distinguished themselves included the counts Van den Berghs, beginning in the 16th century; Jan van den Bergh (1587-1660), a Dutch Golden Age painter; Matthias Jansz. van den Bergh (1618-1687), a Dutch...
Another 41 words (3 lines of text) are included under the topic Early Van Der burgh Notables in all our PDF Extended History products and printed products wherever possible.

Van Der burgh Settlers in Canada in the 18th Century