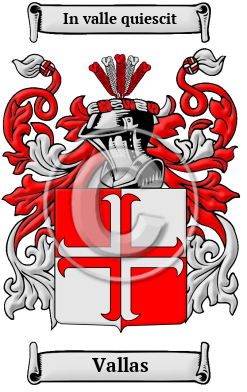 Early Origins of the Vallas family

The surname Vallas was first found in Italy. Bearers of this surname have been found in almost every area of Italy, though certain spellings of the name are more common in some areas than others. In general, those that end in "o" are from the south, whereas those that end in "i" are from the north. Valle is more common in Liguria than anywhere else, while Vallotto, Valotto, Vallon, Vallan, Vallese, Valesi and Valles originate in Venetia. The name comes from the Latin word "vallis," meaning "valley" and was therefore probably given to a family who made their home in a valley.

Early History of the Vallas family

This web page shows only a small excerpt of our Vallas research. Another 34 words (2 lines of text) covering the years 1405, 1457, 1447 and 1500 are included under the topic Early Vallas History in all our PDF Extended History products and printed products wherever possible.

More information is included under the topic Early Vallas Notables in all our PDF Extended History products and printed products wherever possible.

Migration of the Vallas family

Some of the first settlers of this family name or some of its variants were: bearers of the $ surname, who settled along the east coast of North America. Maria Lovisa Vallett arrived in Nova Scotia in 1752; Joseph Valle came to New York by ship in 1824.

Motto: In valle quiescit
Motto Translation: In the valley of our home, we find peace.