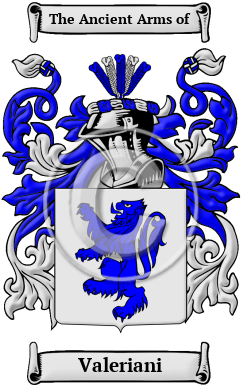 This name is similar to the Latin name Valerius and probably originates from it; Valerius most likely comes from the Latin word "valere," meaning "to be healthy."

Early Origins of the Valeriani family

Early History of the Valeriani family

Prominent among members of the family was Pietro Valeriani di Piperno, a powerful Cardinal in the church; Bertuccio Valiero (1596-1658), the 102nd Doge of Venice, reigning from his election on June 15, 1656 until his death; Silvestro Valiero or Valier (1630-1700), the 109th Doge of Venice, reigning from his...
Another 49 words (4 lines of text) are included under the topic Early Valeriani Notables in all our PDF Extended History products and printed products wherever possible.

Migration of the Valeriani family

Some of the first settlers of this family name or some of its variants were: Antonio Valera, who arrived in North America in 1519 and Francisco Valera, who immigrated in 1565.