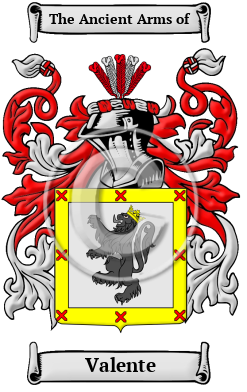 Noble surnames, such as Valente, evoke images of the ancient homeland of the Spanish people. The original bearer of the name Valente, which is a local surname, once lived, held land, or was born in the beautiful region of Spain. In Spain, hereditary surnames were adopted according to fairly general rules and during the late Middle Ages, names that were derived from localities became increasingly widespread. Local names originally denoted the proprietorship of the village or estate. The Valente family originally lived in the place named Valenzuela. This place named is derived from the place-name Valencia, and it means little Valencia. The city of Valencia is situated on the Guadalaviar (now Turia) river. The city was first named Valencia de Campos by the king of Leon in 1150.

Early Origins of the Valente family

The surname Valente was first found in Castile, and important Christian kingdom of medieval Spain.

Early History of the Valente family

Prominent among members of the family were Alonzo Valiente (1482-1564), Spanish conqueror, cousin and secretary of Hernan Cortés and secretary, one of the first governors of Mexico City; Juan Valiente (ca. 1505-1533), a Spanish black conquistador who participated in the expeditions of Pedro de Almagro in present-day Guatemala and Chile; Fernando de Valenzuela (1630-1692), 1st Marquis of Villasierra, Grandee of Spain, a Spanish royal favourite...
Another 64 words (5 lines of text) are included under the topic Early Valente Notables in all our PDF Extended History products and printed products wherever possible.

Valente migration to the United States +

Valente Settlers in United States in the 19th Century

Valente Settlers in United States in the 20th Century

Historic Events for the Valente family +