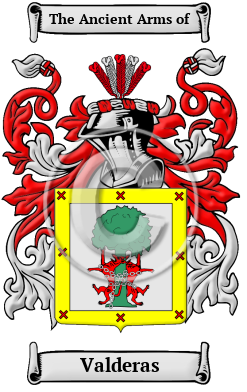 The Spanish surname Valderas is of local origin, derived from a place name where the original bearer resided or held land. In ancient times, before a formal system of hereditary family surnames had evolved, it was common practice to name a person according to their place of origin. Thus, the surname Valderas thus means "one who hailed from Valderas."

Early Origins of the Valderas family

The surname Valderas was first found in the Castilian province of Leon, in the northwestern mountains of the region.

Early History of the Valderas family

This web page shows only a small excerpt of our Valderas research. Another 89 words (6 lines of text) covering the years 1589 and 1628 are included under the topic Early Valderas History in all our PDF Extended History products and printed products wherever possible.

Spelling variations of this family name include: Valderrama, Valderas, Valdera, Balderrama and others.

Valderas migration to the United States +

Valderas Settlers in United States in the 16th Century

Valderas Settlers in United States in the 19th Century