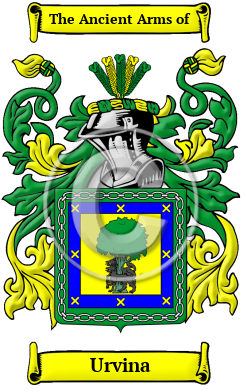 The surname Urvina has its roots in Spain, and is of local or toponymic origin, being derived from a place name. In this case, it may be traced to a place called Urbina, in the judicial district of Vitoria, in the northern Basque province of Alava.

Early Origins of the Urvina family

The surname Urvina was first found in the northern Basque province of Alava. The family was descended from the ancient line of "Señores de Vizacaya."

Early History of the Urvina family

This web page shows only a small excerpt of our Urvina research. Another 100 words (7 lines of text) covering the years 1613, 1682 and 1695 are included under the topic Early Urvina History in all our PDF Extended History products and printed products wherever possible.

Spelling variations of this family name include: Urvina, Urbinas and others.

Another 43 words (3 lines of text) are included under the topic Early Urvina Notables in all our PDF Extended History products and printed products wherever possible.

Migration of the Urvina family

Some of the first settlers of this family name or some of its variants were: Alonso De Urbina who emigrated to Cartagena in 1534; Francisco De Urbina who settled in Peru in 1550; Juan De Urbina who arrived in New Spain in 1567.