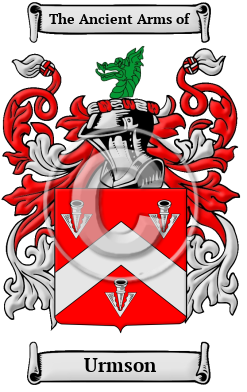 Early Origins of the Urmson family

The surname Urmson was first found in Lancashire at Westleigh, a township, in the parish and union of Leigh, hundred of West Derby. "A family of the local name is mentioned in the reign of Richard I. The manor is found in the possession of the Urmstons, of Urmston, in the reign of Henry III., and appears to have continued in that family for several centuries. " [1]

Early History of the Urmson family

This web page shows only a small excerpt of our Urmson research. Another 83 words (6 lines of text) covering the years 1650, 1952, 1640, 1606, 1685 and 1660 are included under the topic Early Urmson History in all our PDF Extended History products and printed products wherever possible.

Another 27 words (2 lines of text) are included under the topic Early Urmson Notables in all our PDF Extended History products and printed products wherever possible.

Urmson migration to the United States +

Urmson Settlers in United States in the 19th Century