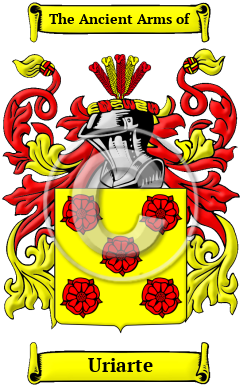 The noble Spanish surname Uriarte, is of local origin, derived from a natural or man-made geographic feature near which the original bearer resided. In this instance, the surname derives from the Basque elements "uri," meaning "town," and "arte," or "middle." Therefore, the initial bearer of the name Uriarte was someone whose home was located between two towns, perhaps in a rather remote area.

Early Origins of the Uriarte family

The surname Uriarte was first found in the district of Marquina, in the Basque province of Vizcaya.

Early History of the Uriarte family

This web page shows only a small excerpt of our Uriarte research. Another 92 words (7 lines of text) covering the years 158 and 1581 are included under the topic Early Uriarte History in all our PDF Extended History products and printed products wherever possible.

Spelling variations of this family name include: Uriartes, Uriates, Iriarte and others.

Another 35 words (2 lines of text) are included under the topic Early Uriarte Notables in all our PDF Extended History products and printed products wherever possible.

In the United States, the name Uriarte is the 12,709th most popular surname with an estimated 2,487 people with that name. [1]

Uriarte migration to the United States +

Uriarte Settlers in United States in the 19th Century