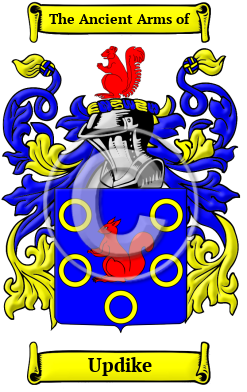 Early Origins of the Updike family

The surname Updike was first found in early documents. It is derived from the word "dyk" which means "dyke." The word "van" which often appears in Dutch names (including most of the variations of this name) is roughly equivalent to "by" or "at," indicating that the name refers to some feature of the terrain near the first bearer's home. Therefore, the first person to bear this name lived near a dyke.

Early History of the Updike family

This web page shows only a small excerpt of our Updike research. More information is included under the topic Early Updike History in all our PDF Extended History products and printed products wherever possible.

From this era of Dutch history, those of this who distinguished themselves included Floris van Dyck (c.1575-c.1651), a Dutch Golden Age still life painter; and Sir Anthony van Dyck (1599-1641), Flemish Baroque artist who became the leading court painter in England. He was the seventh child of Frans van Dyck, a wealthy Antwerp silk merchant and learned painted from an early age. Van Dyck worked in London for some months in 1621...
Another 72 words (5 lines of text) are included under the topic Early Updike Notables in all our PDF Extended History products and printed products wherever possible.

In the United States, the name Updike is the 11,134th most popular surname with an estimated 2,487 people with that name. [1]

Updike migration to the United States +

Updike Settlers in United States in the 19th Century

Updike Settlers in United States in the 20th Century