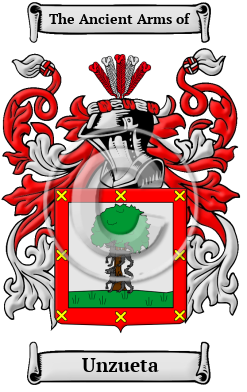 Early Origins of the Unzueta family

The surname Unzueta was first found in Eibar, in the Guipuzcoa province of the Basque Country.

Early History of the Unzueta family

Spelling variations of this family name include: Unceto, Uncueto, Unzueta and others.

Prominent among bearers of the family name at this time was Gabriel Bocángel y Unzueta (1603-1658), a playwright and poet of the Spanish Golden Age. He served as librarian to Cardinal-Infante Ferdinand and also served as bookkeeper and chronicler to...
Another 40 words (3 lines of text) are included under the topic Early Unzueta Notables in all our PDF Extended History products and printed products wherever possible.

In the United States, the name Unzueta is the 18,408th most popular surname with an estimated 2,487 people with that name. [1]