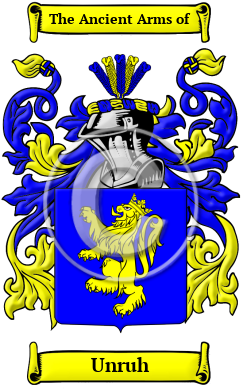 The origins of the German surname Unruh can be traced back to the northwestern region of Pomerania. It is likely that the name is derived from the name of the place where the original bearer lived or held land; thus, Unruh would indicate "one who came from Unrow," a village on the coast of the Baltic Sea. It is also possible that the surname Unruh is of nickname origin, deriving its meaning from the Middle High German word "unruowe," which indicates "restless or quarrelsome person."[1]

Early Origins of the Unruh family

The surname Unruh was first found in Weissensee, where Conrad Unrowe was recorded to be living in 1233.

Early History of the Unruh family

Spelling variations of this family name include: Unruh, Unrow, Unrowe, Unru, von Unruh and others.

More information is included under the topic Early Unruh Notables in all our PDF Extended History products and printed products wherever possible.

In the United States, the name Unruh is the 6,416th most popular surname with an estimated 4,974 people with that name. [2]

Unruh migration to the United States +

Unruh Settlers in United States in the 19th Century

Unruh Settlers in Canada in the 19th Century