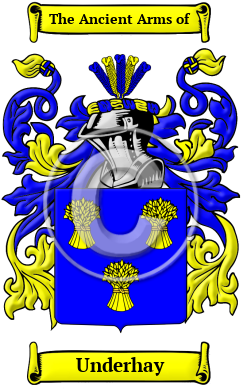 Early Origins of the Underhay family

The surname Underhay was first found in Devon at Ideford, a parish, in the union of Newton-Abbott, hundred of Teignbridge. [1] [2] A very rare name, it is thought the name was derived from "one who lived below the hedge." [3]

The first record of the family was William Underwalle, who was listed in Oxfordshire in the Hundredorum Rolls of 1273. [4]

Early History of the Underhay family

This web page shows only a small excerpt of our Underhay research. Another 60 words (4 lines of text) covering the years 1642 and 1752 are included under the topic Early Underhay History in all our PDF Extended History products and printed products wherever possible.

Spelling variations of this family name include: Underhay, Underhaye and others.

More information is included under the topic Early Underhay Notables in all our PDF Extended History products and printed products wherever possible.

Underhay Settlers in Canada in the 18th Century

Underhay Settlers in Canada in the 19th Century

Underhay Settlers in Australia in the 19th Century