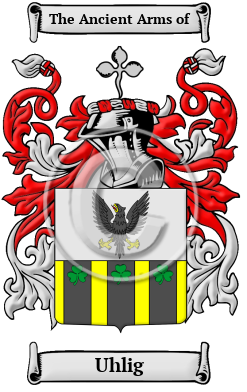 The distinguished and ancient German surname Uhlig is derived from the old Germanic personal name "Ulrich," which is itself derived from the Old High German "uodal," meaning "homeland," and the Germanic "rik," meaning "king." This personal name has been popular in Germany since the Middle Ages due to the fame of St. Ulrich, the bishop of Augsburg, Bavaria, who twice led the defense of his city against Hungarian attacks in the 10th century.

Early Origins of the Uhlig family

The surname Uhlig was first found in East Germany, where this variation of the name is thought to have emerged. The first known bearer of the surname was Ulich, who lived in Czeschau, Brandenburg in 1381. The Uhlig family established itself in this region during the Middle Ages and quickly grew prominent, figuring prominently in the early history of the region and contributing greatly to the development of mediaeval East German society.

Early History of the Uhlig family

Another 40 words (3 lines of text) are included under the topic Early Uhlig Notables in all our PDF Extended History products and printed products wherever possible.

In the United States, the name Uhlig is the 17,946th most popular surname with an estimated 2,487 people with that name. [1]

Uhlig migration to the United States +

Uhlig Settlers in United States in the 19th Century

Uhlig Settlers in Canada in the 18th Century

Historic Events for the Uhlig family +