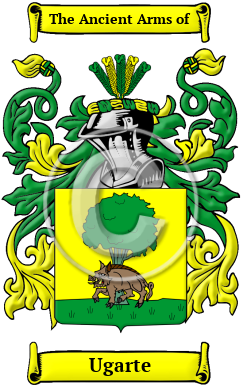 The Ugarte surname is derived from the common place-name Ugarte, which is the name of numerous parishes and districts in the Basque region.

Early Origins of the Ugarte family

The surname Ugarte was first found in the valley of Gordejuela in the northern Basque region of Spain; as well as in Marquina, Tolosa, Ammurio and Victoria.

Early History of the Ugarte family

Spelling variations of this family name include: Ugarte and others.

More information is included under the topic Early Ugarte Notables in all our PDF Extended History products and printed products wherever possible.

In the United States, the name Ugarte is the 15,960th most popular surname with an estimated 2,487 people with that name. [1]

Ugarte migration to the United States +

Ugarte Settlers in United States in the 16th Century

Ugarte Settlers in United States in the 19th Century