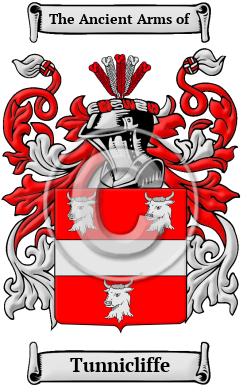 Early Origins of the Tunnicliffe family

The surname Tunnicliffe was first found in Lancashire where the family name was first referenced in the year 1246 when Henry Tunwaleclif held estates in the parish of Rochdale. However, some of the family was found at Yarlett in Staffordshire in early times. "The liberty [of Yarlett] comprises about 400 acres of land, the property of the Tunnicliff family, who reside at the Hall, a neat mansion situated on a gentle declivity." [1]

Early History of the Tunnicliffe family

This web page shows only a small excerpt of our Tunnicliffe research. Another 88 words (6 lines of text) covering the years 1603, 1455 and 1487 are included under the topic Early Tunnicliffe History in all our PDF Extended History products and printed products wherever possible.

More information is included under the topic Early Tunnicliffe Notables in all our PDF Extended History products and printed products wherever possible.

Tunnicliffe Settlers in Australia in the 19th Century

Tunnicliffe Settlers in New Zealand in the 19th Century

Historic Events for the Tunnicliffe family +