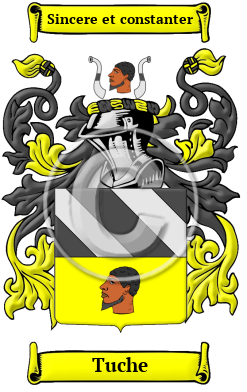 The Tuche family name first began to be used in the German state of Bavaria. After the 12th century, hereditary surnames were adopted according to fairly general rules, and names that were derived from locations became particularly common. The family name Tuche is a local surname. Originally denoting the proprietorship of an estate or influence within a village, the German preposition von, which means from or of, used with local names, was taken as a mark of aristocracy. The surname Tuche was given to someone who lived in Nuremberg.

Early Origins of the Tuche family

The surname Tuche was first found in Nuremberg, where the name was closely identified in early mediaeval times with the feudal society which would become prominent throughout European history. The name would later emerge as a noble family with great influence, having many distinguished branches, and become noted for its involvement in social, economic and political affairs. Founded in 1050, Nuremberg was one of the main cities of Franconia, before its annexation by Bavaria in 1806. It became a major center of exchange for goods coming south from the Baltic ports, and products moving north from the Mediterranean. Frederick II named Nuremberg a Free Imperial City in the 13th century, and during this period of economic prosperity it became a center of the Arts. It was the birthplace of the poet Hans Sachs and the painter Albrecht Duerer.

Early History of the Tuche family

This web page shows only a small excerpt of our Tuche research. Another 194 words (14 lines of text) covering the years 1310, 1332, 1349, 1363, 1794, and 1815 are included under the topic Early Tuche History in all our PDF Extended History products and printed products wherever possible.

In the medieval era, many different cultural groups lived in the German states. There are thus many regional variations of German surnames from that era. Westphalians spoke Low German, which is similar to modern Dutch. Many German names carry suffixes that identify where they came from. Others have phrases attached that identify something about the original bearer. Other variations in German names resulted from the fact that medieval scribes worked without the aid of any spelling rules. The spelling variations of the name Tuche include Tucher, Tuchert, Tucherer, Tuecher, Tuecherer, Tuchner, Tuche, Tueche, Tuocher and many more.

More information is included under the topic Early Tuche Notables in all our PDF Extended History products and printed products wherever possible.

Tuche migration to the United States +

Tuche Settlers in United States in the 18th Century