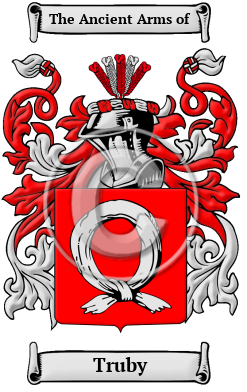 This surname Truby comes from a place name where the original bearer of the name would have resided. The roots of this name are the Polish word "sad," which means "orchard," and the possessive suffix "ow." There are many towns in Poland that have names built from these roots. The bear of the name Truby would have originally been from one of those towns.

Early Origins of the Truby family

The surname Truby was first found in Lemberg (Lwow,) a province of Poland. It is bounded by Lublin, Cracow, Tarnopol and Stanislawow. The main cities are those of Lemberg, Prezymysl, Drohobycz, Rzeszow, Jaraslow, Sambor and Sanock. The town of Lemberg was an important trading post with the east. While Polish represents the majority of its peoples there is also a major Ukrainian representation. The surname became noted for its many branches in the region, each house acquiring a status and influence which was envied by the princes of the region. In their later history the name became a power unto themselves and were elevated to the ranks of nobility as they grew into this most influential family.

Early History of the Truby family

This web page shows only a small excerpt of our Truby research. Another 130 words (9 lines of text) covering the years 1624, 1422, 1624 and 1422 are included under the topic Early Truby History in all our PDF Extended History products and printed products wherever possible.

Another 31 words (2 lines of text) are included under the topic Early Truby Notables in all our PDF Extended History products and printed products wherever possible.

In the United States, the name Truby is the 17,104th most popular surname with an estimated 2,487 people with that name. [1]

Migration of the Truby family