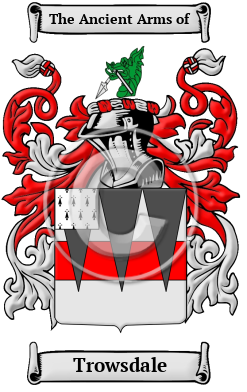 Early Origins of the Trowsdale family

The surname Trowsdale was first found in the North Riding of Yorkshire at Troutsdale, a township in the parish of Brompton, near Scarborough. [1] [2] Literally, the place name means "trout pool." [3] While the township comprises about 1000 acres, the populations has always been small: only 96 inhabitants in the late 1800's. [2] Today known as Broxa-cum-Troutsdale, according to the 2001 UK census, the parish had a population of 44.

Interestingly, Hotten's Lists of Emigrants includes a listing for Phines Trusedell (aged 18 years) who embarked for the Barbadoes in 1635. "Probably Phineas was the parent of the American Trowsdales, Trousdales, or Truesdales. The different forms are still chiefly found, so far as England is concerned, in the North Riding of Yorkshire, in the neighbourhood of Troutsdale." [1]

Early History of the Trowsdale family

More information is included under the topic Early Trowsdale Notables in all our PDF Extended History products and printed products wherever possible.

Trowsdale Settlers in Canada in the 19th Century