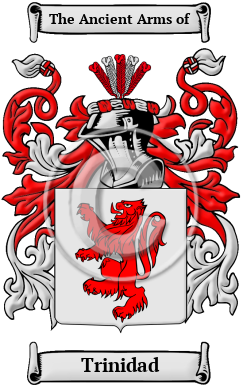 The distinguished Spanish surname Trinidad is derived from the Spanish term for trinity, which further derives from the Latin "trinitas." The surname Trinidad thus means "son or descendant of Trinidad," a name which is rooted in Christian tradition.

Early Origins of the Trinidad family

The surname Trinidad was first found in various kingdoms within Spain.

Early History of the Trinidad family

This web page shows only a small excerpt of our Trinidad research. More information is included under the topic Early Trinidad History in all our PDF Extended History products and printed products wherever possible.

Spelling variations of this family name include: Trinidade, Triniti and others.

More information is included under the topic Early Trinidad Notables in all our PDF Extended History products and printed products wherever possible.

In the United States, the name Trinidad is the 3,639th most popular surname with an estimated 7,461 people with that name. [1]

Trinidad migration to the United States +

Trinidad Settlers in United States in the 16th Century

Trinidad Settlers in United States in the 19th Century

Trinidad Settlers in West Indies in the 16th Century