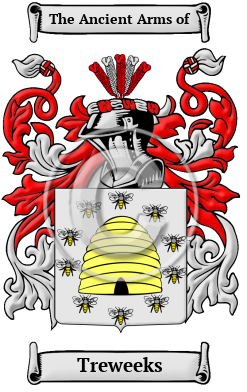 Early Origins of the Treweeks family

The surname Treweeks was first found in Northumberland where Trewick is a township on the river Blyth, 3 miles south-east from Bolam in Northumberland. "Treweek is known to mean sweet, beloved town or village. " [1]

"This place was a member of the barony of Bolam, and in 1240 was holden of it by the soccage service of half a mark by Robert de Trewick, of whose family notices continue to occur till the 14th century." [2]

Early History of the Treweeks family

This web page shows only a small excerpt of our Treweeks research. Another 83 words (6 lines of text) covering the years 127 and 1275 are included under the topic Early Treweeks History in all our PDF Extended History products and printed products wherever possible.

Spelling variations of this family name include: Treweek, Trewick, Treweeks and others.

More information is included under the topic Early Treweeks Notables in all our PDF Extended History products and printed products wherever possible.

Migration of the Treweeks family

Some of the first settlers of this family name or some of its variants were: Nicholas Treweek, who went to America in 1743; as did Richard Treweek in 1804. A J. Treweek is recorded as having moved to San Francisco in 1851 and there are two George Treweeks that are listed as having gone to Jamaica in 1734 when they were 25 years old..