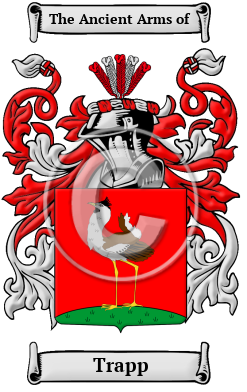 From the historical and enchanting region of Austria emerged a multitude of noble families, including the distinguished Trapp family. Originally, the Austrian people were known only by a single name. The process by which hereditary surnames were adopted in Austria is extremely interesting. Surnames evolved during the Middle Ages when people began to assume an extra name to avoid confusion and to further identify themselves. Often they adopted names that were derived from nicknames. Nickname surnames were derived from an eke-name, or added name. They usually reflected the physical characteristics or attributes of the first person that used the name. The name Trapp is a nickname type of surname for an impish troublemaker having derived from the German word trappe, meaning rogue.

Early Origins of the Trapp family

The surname Trapp was first found in the Austrian province of Styria, moving later to Tyrol, where the name became noted for its many branches with the region, each house acquiring a status and influence which was envied and enrolled by the princes of the region. They possessed their family seat Trappenburg in the region of Leutschbach since ancient times. In their later history the name became a power unto themselves and were elevated to the ranks of nobility as they grew into this most influential family. Chronicles first mention Hans Trapp of Stetbach in 1388, and Cuncz Trap of Wuerzburg in 1409.

Early History of the Trapp family

This web page shows only a small excerpt of our Trapp research. Another 295 words (21 lines of text) covering the years 1655, 1691, 1300, 1709, 1762 and 1819 are included under the topic Early Trapp History in all our PDF Extended History products and printed products wherever possible.

One can encounter great variation in the spelling of surnames: in early times, spelling in general, and thus the spelling of names was not yet standardized; and later, spellings would change with branching and movement of families. Variations of the name Trapp include Trapp, Trap, Trappe, Trapper, Traper, Trappl and many more.

More information is included under the topic Early Trapp Notables in all our PDF Extended History products and printed products wherever possible.

In the United States, the name Trapp is the 3,456th most popular surname with an estimated 9,948 people with that name. [1]

Trapp migration to the United States +

Austria was made a republic after the First World War. The Austro-Hungarian Empire was broken up by the Treaty of Versailles and many of its people found themselves in the new nation of Czechoslovakia. Many other Austrians and expatriate Austrians made their way to North America in the 20th century. Most landed in Philadelphia, later continuing on to the states of Ohio, Texas, Illinois, California, New York, and Maryland. Some Austrian settlers also went to western Canada and Ontario. Research into the origins of individual families in North America revealed records of the immigration of a number of people bearing the name Trapp or a variant listed above:

Trapp Settlers in United States in the 17th Century

Trapp Settlers in United States in the 18th Century

Trapp Settlers in United States in the 19th Century

Trapp Settlers in Australia in the 19th Century