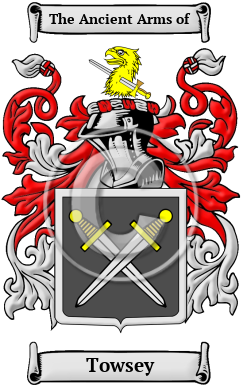 Early Origins of the Towsey family

The surname Towsey was first found in Devon, where the name was a trade or occupational name for "a comber or carder of wool." [1] [2]

Early History of the Towsey family

Distinguished members of the family include Henry Tozer (1602-1650), an English Puritan clergyman and academic from North Tawton, Devon. He was elected to the Westminster Assembly but never sat there. Aaron Tozer (1788-1854), English captain in the navy, born in 1788, entered the navy in June 1801 on board the Phœbe, with Captain Thomas Baker, on the Irish station. He afterwards served in the East Indies and on the home station, and, again with Baker, in the Phœnix, in which on 10 Aug. 1805 he was present at the capture of the French frigate Didon (James, Naval History, iv. 66-74; Troude, Batailles...
Another 128 words (9 lines of text) are included under the topic Early Towsey Notables in all our PDF Extended History products and printed products wherever possible.

Towsey migration to the United States +

Towsey Settlers in United States in the 17th Century

Towsey Settlers in New Zealand in the 19th Century