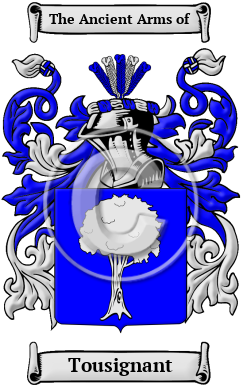 The French surname Tousignant is of baptismal origin, being derived from a name conferred upon a child at the time of christening. In this instance, the surname Tousignant is traceable to the French term "toussaint" or All Saints' Day and would have referred to a child who was born or baptized on that day. All Saint's Day, also called All-Hallow's Day, has been, since ancient times, considered an auspicious time of year, signaling the onset of the Winter.

Early Origins of the Tousignant family

The surname Tousignant was first found in the region of Burgundy (French: Bourgogne), an administrative and historical region of east-central France, where they held lands and estates, signaling their status as prominent French citizens.

Early History of the Tousignant family

Another 32 words (2 lines of text) are included under the topic Early Tousignant Notables in all our PDF Extended History products and printed products wherever possible.

Migration of the Tousignant family