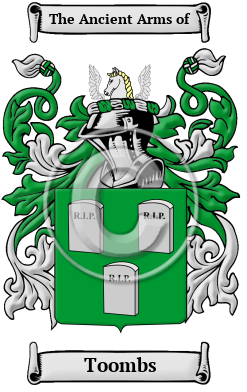 The Toombs surname is one of the many derivatives of the Biblical first name that we know as Thomas. Originally an Aramic word that meant "twin," there are several surnames in most European languages that derive from this same source.

Early Origins of the Toombs family

The surname Toombs was first found in the county of Worcestershire, in central England where they have been found since at least 1327, when Walter Tomes was recorded in the Subsidy Rolls.

Early History of the Toombs family

This web page shows only a small excerpt of our Toombs research. Another 86 words (6 lines of text) covering the years 1601, 1602, 1701, and 1702 are included under the topic Early Toombs History in all our PDF Extended History products and printed products wherever possible.

More information is included under the topic Early Toombs Notables in all our PDF Extended History products and printed products wherever possible.

In the United States, the name Toombs is the 5,565th most popular surname with an estimated 4,974 people with that name. [1]

Toombs migration to the United States +

Toombs Settlers in United States in the 19th Century

Toombs Settlers in United States in the 20th Century

Toombs Settlers in Canada in the 19th Century

Toombs Settlers in Australia in the 19th Century